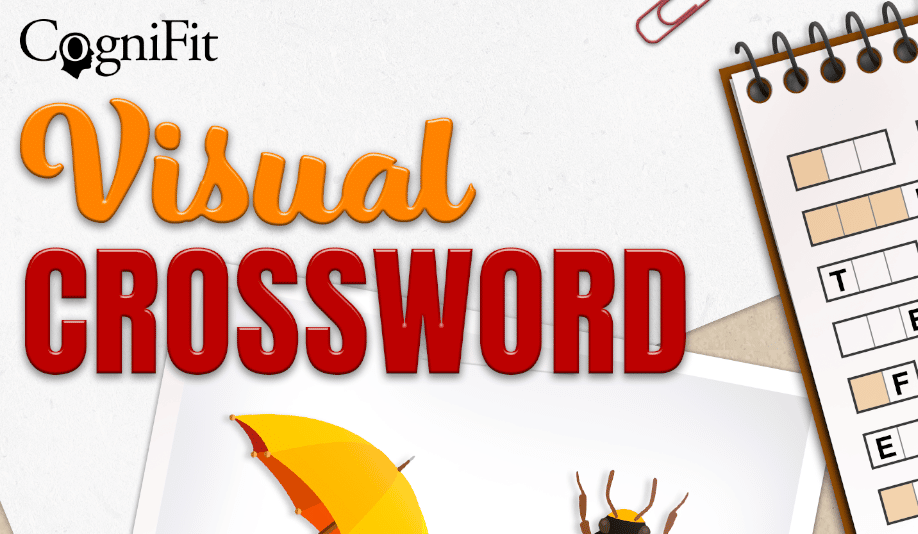 Visual Crossword isn’t a traditional crossword. In any other version, you would sit at the kitchen table with a cup of coffee and hash out however much time you have until the demands of adulthood start calling. But CogniFit’s version (like all its other brain games) targets certain cognitive functions to help build brain plasticity.

Today, let’s take a look at how Visual Crossword works and what area of the brain it targets.

How To Play Visual Crossword

The first thing you’ll notice is that the string of boxes doesn’t intersect. Instead, they for strings of words that will (when complete reveal a quote by someone famous – something funny, motivational, or inspiring).

What you have to do is focus on the right side of the screen. You’ll get a flash of an image, and then it will disappear. Afterward, you’ll get four letters. You have to choose the first letter of that word. So, if you saw a violin, you would click “v” and so on.

There’s also a countdown clock that gives you time on lower levels but far less wiggle room on harder difficulties. And as levels increase, you’ll have more than one image to memorize and less time to click the letters.

And before you think this is a breeze. There are some images that will throw you for a loop. For example, there is one you would swear is a certain flower name but is an entirely different one. So, stay on your toes!

How Does Visual Crossword Help Your Brain?

Naming is our ability to refer to an object, person, place, concept, or idea by its proper name. This sounds simple, but it’s important to realize that for us to do this we have to access our internal dictionaries containing tens of thousands of words and pull up these words on demand. Then we have to use our verbal functions to say them out loud.

These three phases are independent, which means that one of them can be altered without affecting the others. As such, the ability to remember a specific word is unrelated to the information that you have about the object that you want to name.

There are also other disorders where Naming is affected, like Alzheimer’s Disorder, Specific Language Impairment, or semantic dementia.

This brain function lets us make sense of what we see. Reading these words might seem easy. But for someone with dyslexia, it’s not such an easy process. It all starts with the eyes…

Ah, memory. Probably the one thing most of us wish we would improve. But did you know there are different kinds?

Also called “operative memory” it’s a set of processes that allow us to store and manipulate temporary information and do complex cognitive tasks like language comprehension, reading, learning, or reasoning. It’s also a kind of short-term memory.

Definition of working memory according to the Baddley and Hitch model

Working memory, according to Baddley and Hitch, is made up of three systems, which include components for information storage and processing.

Because all short-term memories are limited in capacity (and doorways for information to go into long-term memory), we can’t really nurture them to be something out of a movie; where anyone can remember literally anything. But we can give it a bit of a boost and learn tricks to make it easier. This is especially useful for anyone wanting to learn something new.

And the good news is, it doesn’t take countless hours. The sweet spot of brain training is three times a week and 20 minutes per session. Easy peasy.