As a kid, I never felt motion sick- ever. I would go on the craziest of carnival rides and not feel dizzy one bit. Then a few years ago, I had a severe concussion and suddenly, I felt motion sick anytime I would get in a moving vehicle, train, airplane… even a moving walkway made me feel motion sick. But, why? Turns out it all has to do with the fluid from the inner ear. Check out everything about motion sickness here! What is motion sickness, the different types, symptoms, causes, and treatments? How does it affect the body? How does it affect the brain? What are some tips to prevent it or overcome it? What is motion sickness?

Motion sickness is known for how ill, nauseous, or bad it can make someone feel and dates back all the way to Greek and Roman times… meaning it isn’t just a new thing. It can affect everyone at different levels of severity. Depending on the cause of the motion sickness, it can also be known as air sickness, sea sickness, car sickness, and simulation sickness.

There are three types of motion sickness:

1. Motion that is felt, but not seen. This type of motion sickness is sensed by the sensory system which is why the motion is felt. However, the visual system doesn’t detect much, if any, motion. Examples would be car sickness, air sickness, sea sickness, visual reality, and rotating devices (such as a centrifuge).

2. Motion that is seen but not felt. This type of motion sickness happens because the visual system detects motion, which is why the motion is seen. However, the sensory system doesn’t detect much, if any, motion. It happens due to situations which are known as visually induced motion sickness (VIMS). Examples would be movies/films, visual reality, and space sickness.

3. When both systems feel motion but they don’t correspond. This type of motion sickness happens when one is in an environment where gravity is affected and simulated with centrifugal force. This is known as the Coriolis effect and it causes a sense of motion within the sensory system that doesn’t correspond to the motion that is seen by the visual system. For example, when a vehicle is on a badly maintained road for a long period of time while going slowly, the two senses (sensory and visual) don’t match up. This is because the bad road can jerk a body around which give the sense of extreme motion to the inner ear, but due to the slow speed, the eye doesn’t feel the same amount of motion.

If you feel motion sick, you’ll know right away that something doesn’t feel right. However, some common symptoms include: Some people begin to feel motion sickness while reading in a moving vehicle. This is because the eyes are focused on the non-moving, “steady” object while the inner ear senses motion. The brain becomes confused with all of the different brain signals sent and the person begins to feel dizzy.

The reason that people who often feel motion sickness while in a car don’t feel motion sick while driving is because they can anticipate what’s coming next. For example, they see the cars brake ahead of them, they know when a turn is coming up, they see the stoplight turn red, etc. Drivers have a more accurate internal estimate than passengers which makes them less reliant on their external senses. The anticipation that the driver feels replaces the sensory experience in the brain which prevents motion sickness.

How does motion sickness affect the brain?

Motion sickness is due to the body tried to get rid of neurotoxins. Essentially, the brain thinks it’s being poisoned so it tries to get rid of the toxins. This is thought to occur because humans weren’t made to be in moving vehicles. We have only recently started traveling on boats, cars, and trains. Our brains just haven’t adapted yet. Our bodies have been tied to walking for as long as we have had the motor ability to walk.

Our bodies use the motor cortex (the part of the brain that controls our conscious muscle movement) and the proprioception (the physical sense of ourselves) which help us know, for example, where our arm is behind our back without looking at it. We can sense it. Each of these parts of the brain supply signals to the rest of the brain about our movement. 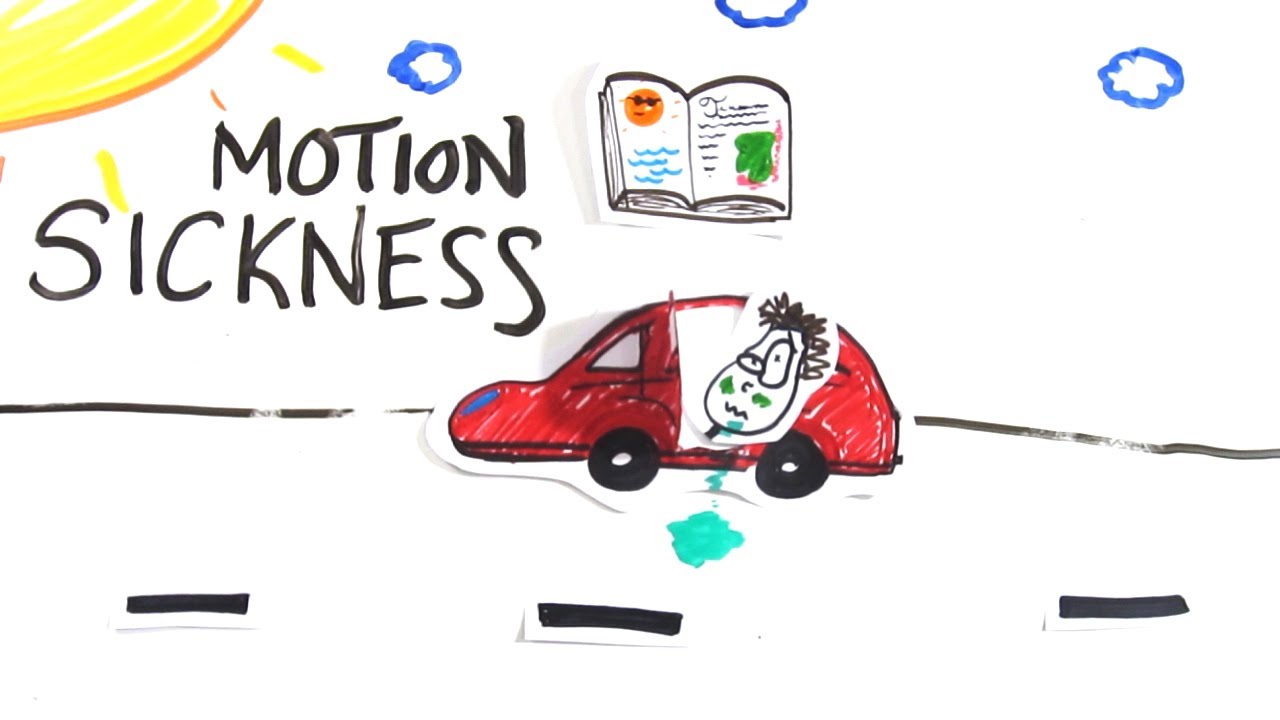 Even though we may be traveling in a car at 50 miles an hour, our bodies perceive that we are stationary because technically, we are just sitting there not moving. At the same time, our brains know that we are going forward at a certain speed because of the balance sensors, little tubes of fluid, that are in the inner ear. When the liquid in these tubes splashes and sloshes around your brain gets mixed messages because the sloshing liquid indicates movement, but in reality, you’re just sitting still. The thalamus takes this information and tries to understand what is really going on. However, it usually comes to the conclusion that it’s being poisoned and often that leads to the feeling of nausea and actual vomiting. That’s simply the brain trying to rid itself and the body of the “apparent toxins”. Our motion sickness comes from our brain’s worry about being poisoned. There are many options for treatment and remedies for motion sickness :

Why do only some people get motion sick?

Think for example about the fact that native Chinese people have the tendency to get train sick while Chinese-Americans don’t have that tendency. This is because there is less opportunity in China for the body to become accustomed to the sensations that cause motion sickness. Also, think about the fact that ice skaters are actually less likely to feel car sick. Why? Because the ice skaters are used to, like that group of Chinese-Americans, the dissonance that happens between what the body is experiencing and what the body is used to. It’s easy to feel motion sick on the metro/subway because you aren’t sure where the next turn is, when the train stops, etc. Your body can’t predict it, and your sensory and visual systems don’t line up.

According to this study published by Oxford Academic, roughly ⅓ of the overall population are highly susceptible to motion sickness. The other ⅔ can get it under extreme conditions. Women are more likely to be affected by motion sickness than men. It’s also probable that it will decrease with age. A 2013 study found that people who sway more, even when they are just sitting, are actually more likely to get body sick than those who remain rather stationary. The bad news is that this study found that if you have a healthy sensory system, you’re susceptible to motion sickness.

How do you deal with motion sickness? Let us know in the comments below!

Rhotacism: A complete guide to this speech impediment

Premarital Counseling: Get to know your partner before marriage